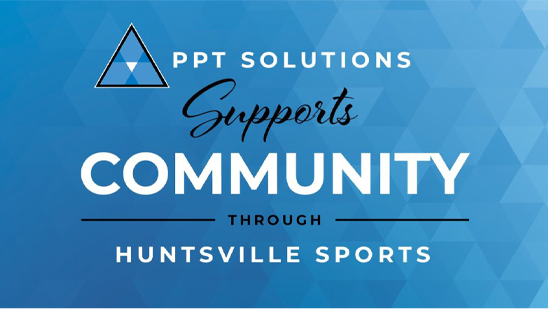 It is no secret the Rocket City is booming, and the growing attraction of local Huntsville sports teams is only fueling that flame.

These sports teams generate a sense of camaraderie and unity, provide a common ground for connecting with others, and add an element of friendly competition into the city’s culture.

The Huntsville Havoc is the city’s professional ice hockey team in the Southern Professional Hockey League. Founded in 2004, the team has thrived season after season, generating a rapid growing fan base each year. The energy in the stands is always contagious! Each season, PPT Solutions supports the Huntsville Havoc as season ticket holders. Check out the team schedule, set to kick off for the season on October 1, 2019.

One of the most popular topics around town this year has been the arrival of the new Minor League Baseball team in Huntsville, the Rocket City Trash Pandas. The community has rallied around this sports team from the beginning, with the opportunity to vote on the team name in the fall of 2018.

Since then, the Trash Pandas have sold $1.5 million worth of merchandise. Initially, the team broke MiLB records, selling $500,000 in merchandise in just six weeks. Additionally, nearly 900 season tickets (every home game for three years) have been sold.

The Rocket City Trash Pandas is the first professional baseball team to call Huntsville home since the Huntsville Stars played their final season in Joe Davis Stadium in 2014. Today, a brand new $46 million ballpark is under construction at Town Madison and will be completed by January 15, 2020. The park features a 360-degree concourse, bar/restaurant area in the outfield, sixteen luxury suites, and more.

The first game of the season will be held on April 15, 2020, as the team plays host to the Mississippi Braves. PPT Solutions is proud to be season ticket holders!

Check out more about the Rocket City Trash Pandas here.

The most recent development in the world of sports in Huntsville is the introduction of the Huntsville Championship, set to be held April 20-26, 2020, as part of the Korn Ferry Tour (previously named the Web.com Tour). The event will be hosted at The Ledges, one of the top-ranked golf courses in Alabama.

The Korn Ferry Tour is the premier developmental tour in professional golf, serving as the breeding ground for stars of tomorrow. This exciting event will allow local partners, volunteers, and fans to be part of an incredible community gathering.

The Huntsville Championship will consist of 156 players competing for a $600,000 purse. A five-year partnership is in place through 2024. The Community Foundation of Greater Huntsville will be the tournament’s featured charitable beneficiary.

As part of the week-long event, The Pro-Am, held April 22, offers the ultimate golfing experience, enabling clients, business partners, prospects, and top executives to compete side-by-side with a professional in a fun, engaging environment.

Our team is passionate about giving back to the communities in which we come from and getting involved in various events, to include supporting our sports teams. As season ticket holders for the various Huntsville sports teams, we share these across our employee families. Sharing these tickets with our employees and their families is just one of the ways we say “thank you” for the time and commitment they give to PPT Solutions and our customers.

Community support is incredibly important to the PPT Solutions team. We support a variety of local and national organizations throughout the year. Check out the full list here. “Being part of the community is important,” said Jim Reeb, PPT Solutions President. “If we are able to participate in community events, give back to the community with our time and resources, to me that means that we are successful. That is the true definition of success.”

Incorporated in 2005, PPT Solutions, Inc. provides systems and software engineering services to government and commercial aerospace organizations. PPT represents People, Processes, and Technology, and it is our goal to offer solutions that improve the effectiveness of these three things to work together for optimum performance. Find out more today!